Solving the jumbles or scrambles is no longer a difficult thing to do. Different applications are present online to perform such tasks in no time. Jumble Solver is one of the applications that many game players mostly use to solve jumbles. It helps you solve the jumbles, no matter how difficult they are.

Jumble Puzzle Solver will find all possible answers for you. It is one of the best jumble solvers on the internet. It solves by rearranging the letters to make a single word or unscrambling various jumbled words. It is also used to create a sentence out of given words in a random format. Like, if there is a scramble that holds few words which are not arranged in a sentence formation, then Jumble Solver can solve that in no time. It would help solve that jumble by providing a few possible solutions. It means that there is no such jumble that can not be solved now due to such a great application. We bring you this ultimate Word Jumble Solver Today.

A Jumble Solver is a tool that translates jumbled language into its correct meaning, eliminating the ambiguity created by jumbled speech.
Word Jumble Solution is the most popular name. Originally called Scramble, Jumble was created in 1954 by Martin Naydel. Jumble has undergone several ownership and maintenance changes since its founding, but it has never lost popularity. Over 600 newspapers in the United States and abroad published the Daily Jumble and Sunday Jumble puzzles. The game requires scrambling of words. And you may call it Scramble Words Maker.

An image is used as a clue to a jumbled or scrambled set of words and a picture illustrating the clue, or you may call it an indication. Using the words scrambled, you must arrange the letters to spell the phrase corresponding to the clue. There are hints and tips in the clue and drawing about the answer. Sometimes the answer will be a pun, joke, or homophone. Four anagrams are given, there is another combination of two, five letters, and two, six letters are also there, then in addition to the above, there is a clue apart from the blank spaces for you to answer for your jumbled word correctly. 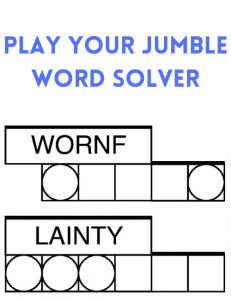 How This Thing Works

You have to put the jumbled word into the space box mentioned right below. Which is placed on the right end corner of the blank space box. When you put the exact amount of words in it, and then you have to press the find button. Your Jumble Solver will let you find the exact words for your jumbled words within no time. 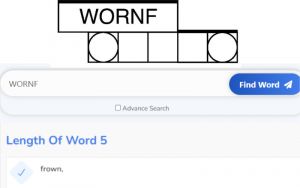 Would you like more information about this? In the jumble solver, you enter vowels and consonants in the order they appear on the screen. Type the numbers as you see them, whether they are seven letters, six letters, five letters, or another number. And wait for the magic to happen. This incredible tool has dramatically helped everyone who has needed to unjumble words.

Most of the players also look out for Daily Jumble Puzzle Solver while playing the game so that they can get good points in no time. 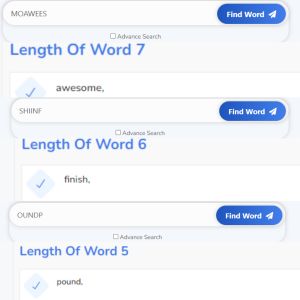 Depending on your hardware, you can use the infinite wildcards. To make your search better and more appropriate, try using this Jumble Solver so that you can enjoy the overall game with your family and friends.

There is practically no restriction in using the number of letters to search out the exact word from the scrambled words in Jumble Solver.

Use a paper for perfect gameplay

The scrap paper you have at home can prove to be a helpful tool when it comes to solving word scramble puzzles. It helps your brain make all the possible combinations of letters for solving the puzzle when you write out the letters. In addition to helping you better remember the puzzle, writing helps cement patterns to your memory, so you will be able to play Words with Friends and Scrabble later on.

One of the best features of Jumble Solver is that it can solve numerous words into a simple single sentence. In case if different words are placed in one.

You can quickly and efficiently solve jumble word puzzles by noticing the patterns of letters in words. You will be able to solve puzzles more quickly once you identify these letter patterns in a puzzle. The same skill can benefit you when playing Scrabble or Words with Friends.

One of the fantastic features of Jumble Solver is the wordlist’s length which provides possible solutions to your query. The small word list contains 84090 words, and the large one provides 438509 words in the Jumble Solver.

The feature mentioned above is the best of all components. It provides a minimalistic interface to the users by providing only the information required. It does not include any additional elements that can confuse the users.

Jumble puzzles can be solved using a variety of strategies. You probably have already tried at least one trick when searching for word jumble help. Furthermore, it is always beneficial to expand your list as a jumble word solver to increase your expertise. Below are some tips for helping you become an even better word jumble cheat and supporting your daily jumble solver passion.

1. Use a prefix or a suffix, such as “RE” or “ING”. It is helpful for extending other words.
2. Find words that often have the same letters together, such as “BR” or “TH”.
3. The consonants and vowels should be separated.
4. Try matching consonants and vowels so that you can make a short word.
5. You can then add other letters to make it longer.
6. Even though they don’t generate as many points in a game, vowels can create words on their own
7. Play with the word by adding other letters to pluralize it or change its tense
8. You can easily make it with just two or three letters.
9. Any words that come to mind should be written out with a pen or pencil and paper.
10. Try to make longer words by adding other available letters.

Jumble is a game introduced to confuse the players by using different arrangements of letters of words, and Jumble Solver can quickly solve them. The application helps you solve other jumbled words by providing all the possible answers for the puzzles. A user can enter letters up to 14 to search for the correct phrase.

In return, this jumble solver would provide you with all the possible solutions for your desired puzzle. At the start, you have to enter the letter and press the button indicating Need More Options. Solve the jumble into different words of a similar kind and display the answers on your screen. Making this Jumble Solver as the most demanded application for many users to solve jumbles.

Always start with using the tool. And try to unjumble two words at a time. 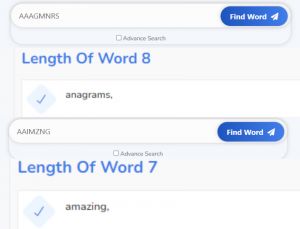 Always start with using the tool. And try to unjumble three words at a time.

Always start with using the tool. And try to unjumble Four words at a time.

Solving Word Scrambles is a perfect game for word lovers. All you have to do is put the jumbled word in it, and you will get the perfectly answered word in your front within no time. By doing this, you have the power to amuse your friends and family members. This ultimate platform allows you to get much attention from the people you are competing with. They will be amazed to see the type and the response from you that takes less than 30 seconds to complete your task.